„May all those, who cannot properly handle it, bring their money to me. Come, at noon or at midnight, Mr Maurus does not sleep when there’s coin to be made..“

The story of Mr Maurus’s Pub — History and location 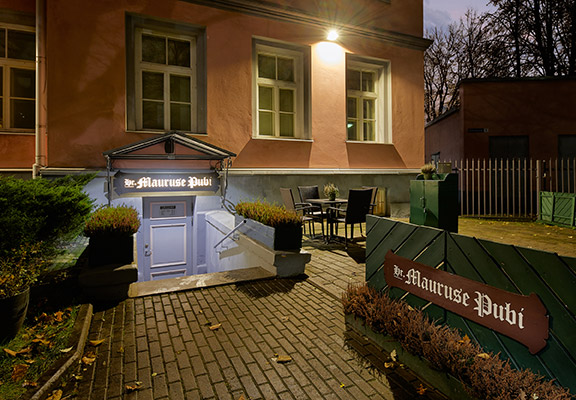 In order to tell you the whole story, we must start from the very beginning.

From 1994 to 2001 Mr Maurus’s Pub carried the name of Café Wallas. The pub’s inception was largely inspired by the colourful history of the very building it is situated in. Curiously, the pub is located in a house constructed in 1895 for the Tallinn Russian Social Community, which operated there until 1918.

The venue, which was more commonly known as the Russian Club, became rapidly one of the epicenters of Tallinn’s social life. During the First World War, the house of the Russian Social Community was expropriated for use by the City Government. Back in the day, the premises of Mr Maurus’s Pub housed a bowling alley; later on, it was utilised as a potato storage facility by the food provisions branch of the Tallinn City Government, and later still, it served as the premises for several workers’ organisations and associations.

It is assumed, that either before or during the first Republic of Estonia, the building housed a sauna, visited exclusively by local chimney sweeps. During the war, the cellars were utilised as an air-raid shelter, providing protection not only for library staff and readers, but also citizens. During airstrikes the library doors would be kept open, so that people could find safety inside.

The name of the library has changed many times — it once bore the name of Maksim Gork, then that of Anton Hansen Tammsaare, but since 1994, it is called simply Tallinn Central Library.

The origin of Mr Maurus’s Pub can be traced to the private grammar school of Mr Maurus — one of the most colourful characters in the works of Anton Hansen Tammsaare. The venue is located in a hub of culture and education — our next door neighbours are Tallinn Secondary School of Science and Tallinn English College. This makes Mr Maurus’s Pub an incontestible societal focal point amid educational institutions and a library, a true favourite among townspeople. The pub embodies this literary spirit and historical significance, which is also conveyed in the interior design of the pub — shelves filled with books and pictures from the good old school days.

Mr Maurus invites everyone to spend a pleasant and comfortable time here, and enjoy delicious Estonian dishes with a rich selection of beers from around the world. This is the ideal atmosphere to have an ardent discussion among friends, to celebrate a special occasion, or to simply enjoy a book found on one of the bookshelves. As in the old times, the doors of Mr Maurus’s Pub remain open to everyone, providing an escape from everyday dullness and loneliness — a place to be together.

Whether you happen to be a banker, a lawyer, a real estate agent, or perhaps a student, a poet, or a pensioner, here you can quickly and inexpensively fill your belly, while feeling right at home. Remarkably, Mr Maurus’s Pub brings together very different people, and it is not at all uncommon for new and lasting friendships to be established here. Tolerance, openness and friendliness have always been a major force for good. This is exactly why Mr Maurus wants to bring together many fascinating people — this is truly a good place to be.